FOR SAMA (2019): This agonizingly intimate account of the Syrian war will make you forget about your first-world problems

Two young boys, hardly the age of ten, both covered in dust, are rushing the lifeless body of another young boy into a makeshift hospital in Aleppo. A missile hit their house. The boy, Mohammed Ameen, was their brother. Their mother arrives, looking for her child. She insists on carrying the body herself; “My darling is dead. He’s dead.” There is no censoring whatsoever in this scene; the blood, the dust, the pain is raw and achingly visible.

Another moment, little children are painting the remnants of a burned school bus, a glimpse of happiness is evident in their faces. A break from war where they are finally allowed to be children. A colourful moment in a dark childhood, until the audience is reminded; “It was bombed… (it was) a cluster bomb,” explains a little girl, whose age should barely allow for the grasp of such vocabulary.

Back in 2012, when she was a economics student, Waad al-Kateab picked up her mobile phone and started documenting Aleppo’s civil unrest and protests against Bashar al-Assad. Little did she know back then that six years later, she would be a wife, a mother, an Emmy award-winning filmmaker and a refugee. What began as innocent documenting via mobile phone videos, eventually composed a feature-length narration of one of the bleakest stories of contemporary history.

For Sama is one of the documentaries about the Syrian war that allows the audience to truly immerse themselves into the misery, cost, and quail of war through female eyes. Through the eyes of Waad al-Kateab, the audience experiences Syrian civil war life first-hand: falling in love and becoming a mother while fighting for justice and surviving devastation and terrible loss in times of war. 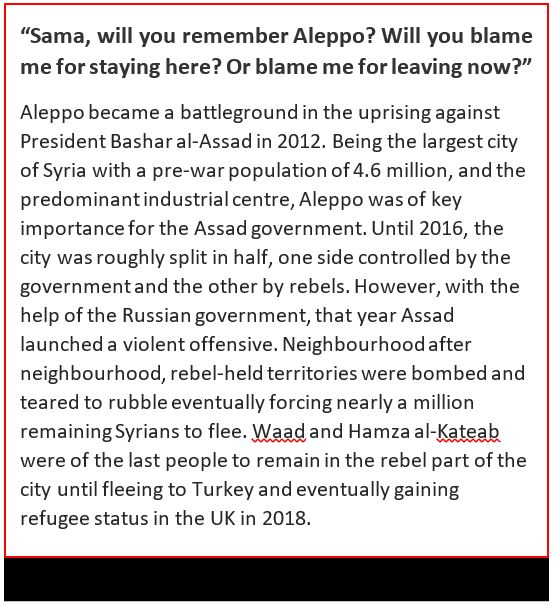 Social Life continues amidst shell-bombings and airstrikes. Waad makes friends whom she fights with for the freedom of Aleppo, falls in love and marries doctor Hamza al-Kateab, builds a home for their family time and time again, gives birth and raises a daughter. The film serves as a letter and an explanation for Waad’s firstborn daughter, Sama; “I need you to understand why your father and I made the choices we did,” she narrates, “what we were fighting for.”

While the technicality may be lacking at times, the occasional low audio-visual quality of the filming is readily forgiven. In this documentary, the creator is also the victim, who suffers and whose life is tragically transformed due to the events being documented. Put together brilliantly with co-director Edward Watts, this collage of intimate moments is at times so painfully raw and vivid, that tempts one to look away. Nevertheless, the sense of responsibility that comes with knowing that the harrowing images are real life, overpowers the temptation. And that, perhaps, is one of the most important functions of this documentary.

Uncensored accounts such as this one, providing the human element, may just be the antidote to the passivity induced by the nonchalant war-reporting of western media. It is highly unlikely that one’s compassion and understanding of the Syrian conflict or attitude towards Syrian refugees, remains unmoved upon watching For Sama.